Dooyeweerd: Structural Principle of the State (9) 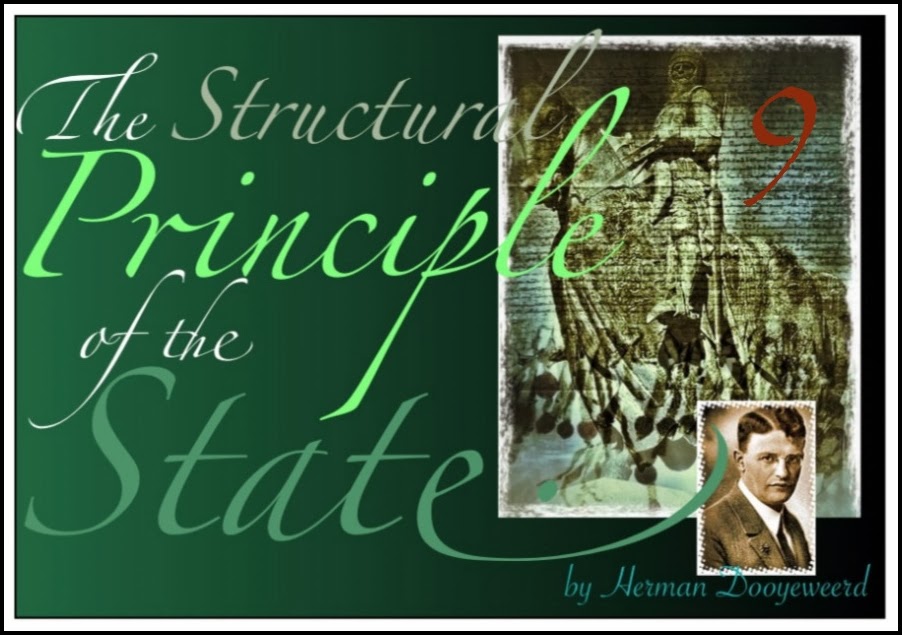 THE STRUCTURAL PRINCIPLE OF
THE STATE (9)
by Herman Dooyeweerd 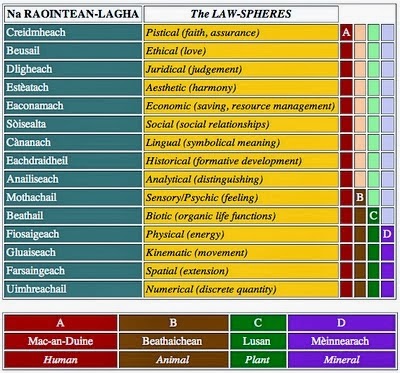 The typical integrating character of the leading legal function in the Structure of the State. The State's people as an integrated whole.
We have now arrived at the most critical point of our inquiry. The leading function in the structure of the State has proved to be a public legal relationship uniting government, people and territory into a politico-juridical whole. As the structural whole has priority to its constituents, it makes no sense to speak of the latter in terms of separate "elements" of the body politic. This is also to be kept in mind with respect to the leading juridical aspect of the State-institution. That the latter has nothing to do with a particular aim of the State has been shown above in our critical analysis of the old liberal idea of the law-State. A body politic cannot realize specific purposes unless it exists as such. And it cannot exist apart from its structural principle qualified by its leading function. This leading function lacks a typical non-juridical qualification, since the foundational function of power cannot supply this. In principle this implies the unique universality and totality of the internal legal community of the State, which is not found in any other societal structure.
The traditional universalistic theory of the State as the integral totality of all the other societal structures seems thus to be justified at least with regard to the legal organization of the body politic. In the internal structure of the State the modal juridical sphere-sovereignty does not seem to be individualized as a typical structural juridical sphere-sovereignty. But is the State, in its internal juridical sphere, really a juridical community with an unqualified coercive legal power, absorbing all the internal juridical relationships of a different radical and geno-type, as its component parts? This is impossible, since the individuality-structures of the non-juridically qualified legal relationships can never assume the structural character of public legal relationships inherent in the State. The relation between the typical universality of the internal public legal sphere of the State, and the qualified juridical spheres in non-political societal structures, cannot be conceived of in the schema of the whole and its parts.
The problem raised by the leading function of the State will perhaps be brought nearer to its solution if we remember that every body politic organizes a people within a territory into a typical, legally qualified, public community. The State's people is indeed the typical totality of all the citizens irrespective of their family-relations, their Church-membership or their philosophical convictions, their trades or professions, class-distinctions, or their social standing. The State constitutes a typical integrating political unity in spite of any differences or divisions which its people display in other societal relationships.
How is this integration possible? The State cannot integrate these differences in profession or trade, ecclesiastical or philosophical trends, social classes, etc., into the structure of a totalitarian professional or industrial organization, a totalitarian philosophical or Church community, or in the social structure of a totalitarian class. Nor can the State become an undifferentiated totality of all the "special" societal relationships within its territory. The integration of the citizens into the political unity of a people is in principle bound to the typical structure of the body politic, in which the leading function is that of a public legal community. This is an unparalleled, unique structural principle enabling the State to organize within its territory a truly universal legal communal bond transcending all non-juridically qualified legal societal relations. Neither internal ecclesiastical law, nor internal industrial law can have this typical public juridical integrating function, however large the number of the members of a Church or an industrial community may be. These legal spheres are limited by the typical particularity of their non-juridical qualification and lack the universally integrating character inherent in the internal public legal sphere of the State. In the territorial legal community of the body politic all the specifically qualified juridical interests should be harmonized in the sense of a truly public legal retribution, and integrated into "the public interest".
This implies that the principle of public interest must itself have a typical juridical qualification which delimits its supra-arbitrary structural meaning. It can never warrant an encroachment upon the internal sphere-sovereignty of non-political societal relationships. For the idea of an absolute competence of the State contradicts the modal meaning of the juridical aspect and is incompatible with the typical structural principle of the body politic. We shall return to this point presently.

The real meaning of the absolutist idea of the State and the true idea of the law-State.
A real public legal integration of a country and people is therefore only possible within the internal limits set by the structural principle of the State-institution itself. This integration can only be accomplished within the juridical limits set by this structural principle to the competence of the body politic, and with due regard to the internal sphere-sovereignty of the other societal structures. Every political theory denying these limits is in principle a theory of the "power-State", even though it masks its absolutization of the State's power by a law-State ideology.
In whatever shape the absolutist idea of the body politic is set forth, it does not recognize any intrinsic legal limits to the authority of the State. This idea implies an absorption of the entire juridical position of man by his position as citizen or as subject of the government.
If we cannot appeal to any law outside of the State, if the body politic has a so-called "Kompetenz-Kompetenz", i.e. a pseudo-juridical omnipotence, then the authority of the State has been theoretically deprived of any legal meaning and has in principle been turned into juridically unlimited political power. Neither a theoretical subjection of this power to some general principles of natural law, nor a theoretical construction of a so-called legal self-restriction of the State-power, can undo the harm implied in the initial absolutization inherent in the idea of sovereignty of the body politic, current since BODIN. But in the true idea of the law-State, the divine structural principle of the body politic limits the peculiar universality of the internal public law to a universality and sovereignty within its own sphere of competence. Every attempt on the part of an absolutist government to exceed the intrinsic boundaries of its legal power results in a despotism which undermines the very fundamentals of its authority. But even such a despotism can only occur within the structural principle of the body politic, which is beyond any human arbitrariness.

The salus publica and distributive justice.
In its qualifying juridical aspect the public interest implies the typical public legal measure of distributive justice which requires a proportional distribution of public communal charges and public communal benefits in accordance with the bearing power and the merits of the subjects (5).
_____
(5) KANT, and the Humanistic teachers of natural law before him, did not understand the original Aristotelian sense of the idea of distributive justice. This idea originally bore on the internal communal law of the State, and not on private civil juridical relations as intended in KANT's idea of law as a normative principle of juridical coexistence. We have shown in an earlier context that even the Aristotelian conception of commutative justice is not to be understood in an individualistic sense. KANT, however, understands by iustitia distributiva or "austeilende Gerechtigkeit" only such justice as is administered by a civil judge, as an impartial instance created by the "general will" for deciding private legal disputes. Cf. Met. Anfangsgünde, I §§ 39 and 41.
_____
In his book La Responsabilité de la Puissance Publique, the French professor of constitutional law PAUL DUEZ has especially pointed to the significance of this public legal standard in the administrative jurisdiction of the French Conseil d'Etat. But it is of a universal import with respect to the whole internal public administration and administrative legislation. And as a legal principle of the public interest it clearly contradicts the erroneous opinion that administrative law is only a formal juridical frame-work for the pursuing of communal aims.
The salus publica, thus conceived, is a political integrating principle binding all the variable political maxims to a supra-arbitrary standard. It binds the entire activity of the State to the typical leading idea of public social justice in the territorial relations between government and subjects. Externally the task of the State cannot be delimited in a universally valid way, because the body politic, as a real organized community, functions in all the aspects [also] of temporal reality. In principle, it is impossible even to exclude the State from the spheres of morality and faith. The State may promote the interests of science and the fine arts (6), education, public health, trade, agriculture and industry, popular morality, and so on.
_____
(6) Remember that in case the modern State gives financial support, this is done with revenues from taxation levied from its citizens by means of governmental coercion. State-support is therefore something quite different from that given by a private association for the promotion of sciences or the fine arts, because in associations the members give support out of their own free will.
_____
But every governmental interference with the life of the nation is subject to the inner vital law of the body politic, implied in its structural principle. This vital law delimits the State's task of integration according to the political criterion of the "public interest", bound to the principle of sphere-sovereignty of the individuality structures of human society.
The internal political activity of the State should always be guided by the idea of public social justice. It requires the harmonizing of all the interests obtaining within a national territory, insofar as they are enkaptically interwoven with the requirements of the body politic as a whole. This harmonizing process should consist in weighing all the interests against each other in a retributive sense, based on a recognition of the sphere-sovereignty of the various societal relationships.
To give a concrete example, we will consider the administrative juridical regulation of the many-sided concern of public health. This is a real concern of the public legal sphere of the State which, as such, is not qualified by a non-juridical aspect. The particularity of the subject matter of this administrative legal regulation is its concern with the bio-social structural aspect of the national community. Nevertheless, the regulation itself ought to be guided by the public legal principle inherent in the "public interest".
No doubt such a positive regulation is intended to serve a particular political purpose, viz. the improvement of public health. This purpose in itself does not differ from the aims of private societies for the improvement of national health. But this part of administrative law, as well as all the relevant executive measures taken by the organs of the State, has an internal, public juridical qualification. The internal structure of administrative law makes it obligatory on the government always to weigh the various private legal interests carefully against each other, and against the "public interest", in a retributive sense. These private interests must be harmonized and integrated in the public juridical interest. This is not required in the case of private societies for the promotion of public health, whose structure has a non-juridical qualification, and which are not founded in military power.