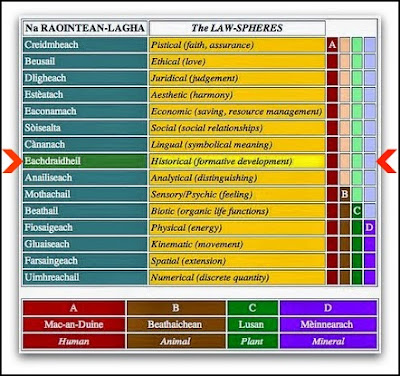 __________________________________
IMPORTANT NOTE
ON DOOYEWEERD'S USE OF THE TERM
“RELIGION” -
“To the question, what is understood here by religion? I reply: the innate impulse of human selfhood to direct itself toward the true or toward a pretended absolute Origin of all temporal diversity of meaning, which it finds focused concentrically in itself."
(Herman Dooyeweerd, Prolegomena,
New Critique of Theoretical Thought, p57)
_____________________________
NOTE ON "GROUND-MOTIVES" -
"'The religious ground-motives in the development of Western civilization are basically the following:

1. The "form-matter" ground-motive of Greek antiquity in alliance with the Roman power motive (imperium).

2. The Scriptural ground-motive of the Christian religion: creation, fall, and redemption through Jesus Christ in communion with the Holy Spirit.

3. The Roman Catholic [Thomistic] ground-motive of "nature-grace", which seeks to combine the two mentioned above.

4. The modern humanistic ground motive of "nature-freedom", in which an attempt is made to bring the three previous motives to a religious synthesis concentrated upon the value of human personality.'"

It is a trivial truth that legal history is not economic history or art history.

For ontological historicism, however, there is an immediate problem: what criterion would permit the distinction of these several domains of investigation? Whichever way you look at it, the criterion itself can never be just historical. Without a concept of law one cannot practice legal history. Although that concept, in its subjective theoretical character, will have a history of its own, nevertheless, as law concept it inevitably tries to grasp in theory the constant modal structure which guarantees the jural character of legal phenomena.

Anyone who thinks that the legal historian has constantly to adapt his concept of law to the different popular opinions about law that emerge in the various periods he studies, has not yet understood the nature of the problem we are examining.

In the first place, the concept of law is an articulated scientific concept which depends on theoretical analysis of the different modal aspects of society. Popular conceptions of what is just and unjust are not theoretical concepts about the jural nature of legal life. Even if it were the case that a given legal system takes its rise from popular convictions, this could not in any way be true of of the modal structure of law itself.

Besides, in the second place, reference to different popular standards of what is just and unjust presupposes in the legal historian a concept of law which he could not have derived from those popular conceptions. Only with the help of his definition of law can the legal historian distinguish the legal opinions of a people at a given time from their economic, moral, or creedal convictions, because in the rather problematic popular consciousness the latter are never theoretically differentiated from people’s legal convictions.

Consistent historicism undeniably rests upon a lack of critical insight. A historification of the very modal structure of legal life – the very structure that makes the changing legal phenomena possible – leads to a theoretical elimination of the possibility of a legal history.

Of course, up to this point my argument has offered nothing new. Ever since the renaissance of Kantian epistemology broke the spell of uncritical positivism, the consensus is that the legal historian, no more than the scientific jurist, can derive his concept of law from the changeable “historical material of experience”. Thus, so long as legal philosophy continues to bow to the dogma of reason’s self-sufficiency, what are its options for rescuing the concept of law from relativistic historicism?

Applying the form-matter scheme of Kantian epistemology, Stammler and Kelsen attempted in different ways to reduce the modal peculiarity of jural phenomena to a transcendental thought-form. The content of positive law then exists as a kind of historical substance of experience which is ordered into logical legal categories only by the theoretical knowing activity.

[…] We could enumerate still other attempts (e.g. that of modern phenomenology) at establishing a “universally valid” concept of law, but in the present context I do not intend to submit all these attempts to any closer critical inspection. In our quest for an intrinsically Christian legal philosophy we cannot follow the paths taken by these schools, if for no other reason than that they all start in the philosophical immanence standpoint which surrenders to the dogma of the intrinsic self-sufficiency of theoretical thought. In any case, they cannot help us achieve our goal.

That the humanistic thought patterns and rational ideas are “historically determined” can no longer be denied in the present day with it’s tremendous growth of “historical consciousness”. One can acknowledge the fact without becoming entangled in “historicism.”

The validity of a concept or a judgment cannot be decided by its historical origin, says the so-called critical philosopher, and up to a point he is right! But one should not forget that neo-Kantianism, under the pressure of historicism, meant to protect only the subjective epistemological thought-form of the judgements of law and justice from being historicized. Having chosen its starting-point in the autonomy of reason, neo-Kantianism was obliged to lift these logical forms out of their necessary historical coherence and to proclaim them “free-floating”, self-sufficient, supra-temporal categories or ideas which as such have no historical foundation.

Yet to any deepened historical consciousness this very act of granting independence to subjective humanistic thought-forms and ideas as free-floating, supra-temporal presuppositions of experience or judgement, which are assembled in the abstract category of transcendental consciousness, must appear as pure dogmatism.

“Historicism’ will not be refuted by an epistemological “logicism”. If the first position leads to inner antinomies, the second no less so. Moreover, it remains indefensible against the kernel of truth in the historicist argument that the “thought-forms” themselves betray a dependence on cultural development. One need only to recall the table of categories deduced by Kant, which given its historical dependence upon Newton’s Principia is no longer up to the level of modern physics. Yet these categories and their corresponding “synthetic judgements a priori” were presented as “timeless, universally valid thought-forms making possible all experience of nature in the first place”!

Something more must be said. The subjectivist, essentially nominalist attitude of modern humanist philosophy does not know the difference between the subjective a priori to which both the concept and the idea of law belong, and the cosmic a priori structure of the jural that makes possible and defines all concrete legal phenomena. This structure does not derive its foundational character from subjective human consciousness, but from the constant, temporal world-order that springs from God’s creative will (see New Critique 2:547-548). When you do not distinguish between the modal structure of legal life and our subjective a priori concept of it, you pass off your inevitably historically shaped and fallible subjective insight into the modal nature of legal phenomena for unchangeable and universally valid truth, thus lapsing into an uncritical dogmatism which will in turn be overtaken by the critique of historical consciousness.

The Philosophy of the Cosmonomic Idea has exposed the dogmatic bias of all immanence philosophy. The dogma of the internal autonomy of theoretical thought – the confidence that in thought itself can be found a supra-temporal starting-point absolved in this sense of all temporal contingency – is the fundamental flaw of immanence philosophy. It testifies to a lack of that critical self-reflection which is only possible in the light of the divine Word revelation, because the Word alone can reveal the person to himself. The human selfhood – the heart, the center of human existence from which even theoretical thinking proceeds – is not theoretical but religious in nature. It exists only in the creaturely mode of being of religious dependence upon God. It is, by virtue of the divine world-order, non-self-sufficient! How would it ever be possible to find within theoretical thought, which is only a temporal function of human existence, an autonomous concentration point that transcends the temporal cosmic diversity of meaning?

Modern historicism believes it has finished once and for all with the dogmatic faith in reason of humanistic natural law. Dilthey proposed to replace Descartes’ cogito (I think) with vivo (I live) as the starting-point for a truly critical, historical philosophy. But a basic misunderstanding is at work here. The irrationalist, “hermeneutical” approach of historicism, after all, if it wants to evade a suicidal skepticism, must find its Archimedean point within theoretical thought, even though it emphasizes the depth-layer of thought in what is lived through. For the absolutization of historical development is possible only by way of theoretical abstraction. If theoretical analysis is not first made absolute, the historical cannot be made absolute! The only difference from the Cartesian position is the shift of the Archimedean point from mathematical to historical Reason.

Within historical thought, then, one next has to find a center which in itself is not historically determined since, to pass universally valid judgements, it must be free from all dogmatic ties with particular ideologies.

[…] But it is obvious that a radical historification of theoretical thought in the manner of Oswald Spengler leads directly into a skepticism that eliminates the very possibility of scientific history. To deny the peculiar laws of theoretical thought and to conceive of the science of history as a merely historical phenomenon is to rob one’s own historical opinion of any claim to truth. Dilthey, in his attempt to arrive via a “Critique of Historical Reason” at the universally valid conditions for the science of history, was keenly aware of this problem. However, having rejected Kant’s idealistic abstraction of a merely formal transcendental consciousness, the only option left to him was to take refuge in the idea of an impersonal historical empathy with the stream of cultural development, a form of self-reflection of cosmic historical life within the science of history. This amounts to demanding from the historian that he transcend his own individual historical determination by transporting himself mentally into an impersonal cosmic historical consciousness, which interprets without any prejudice the development of a culture in terms of its own vital core.

Because this impersonal empathy, located within historical development, requires theoretical distance with regard to the individual historical contingency of the investigator, and because the hermeneutical method is explicitly proclaimed to belong to the humanities, it is clear that this notion amounts to the dogmatic, metaphysical elevation of a “free-floating” scientific historical consciousness above the “historical determination” of real society.

The “impersonal historical consciousness of cultural development” which comes to “self-reflection” only within the science of history is a metaphysical construct of the first order. The so-called “universally valid” historical consciousness, freely floating above historical development – whether or not imagined with “empathy” at its core – is indeed the only possible shelter for modern historicism against a wholesale skepticism. But its very endeavor to escape its skeptical consequences forced it to elevate the historical mode of thought to a “free-floating” and therefore “unconditioned” level divorced from all temporal cosmic coherence. In this way it relapsed necessarily into that uncritical dogmatism which it believed once for all to have conquered by the “historical mode of thought”.

Historical consciousness too has its historical development. The modern form of the hermeneutical method is “historically determined”: it is based upon the foundation of modern culture. Both the science of history and the “sociology of knowledge” are unbreakably intertwined with history. For subjectivistic historicism, the escape into the theoretical abstraction of a “free-floating intelligence” remains internally contradictory.