Dooyeweerd: Structural Principle of the State (11) 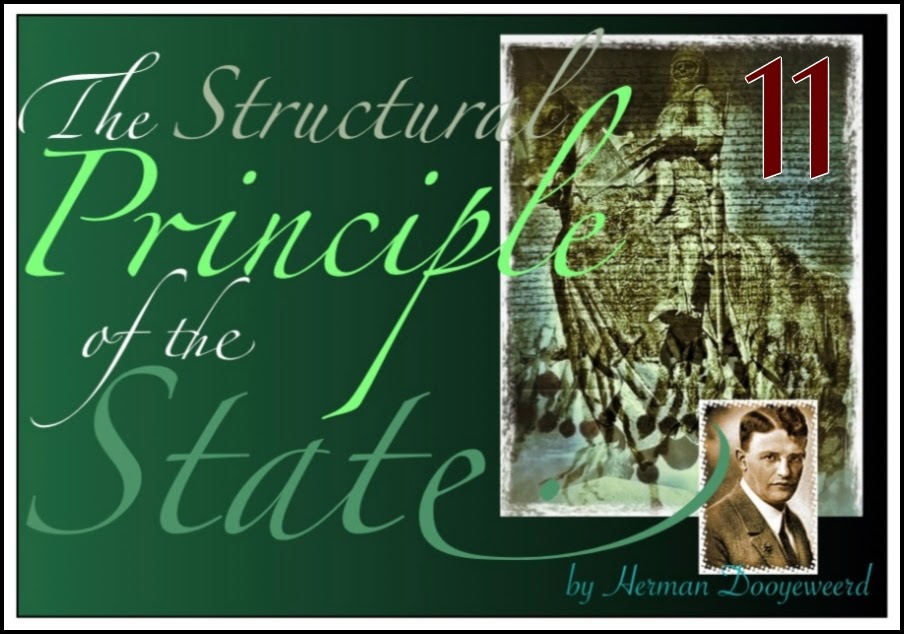 THE STRUCTURAL PRINCIPLE OF
THE STATE (11)
by Herman Dooyeweerd

___________________________
GO TO
[1]  [2]  [3]  [4]  [5]  [6]  [7]  [8]  [9]  [10]  [12]  [13]  [14]  [15]  [16]
_________________________
The dispute about the possibility of a socialist civil law in the Bolshevist legal theory.
In the Bolshevist legal literature the question has been amply discussed as to whether civil and public law is in the nature of the case of a bourgeois character, or if a socialist civil and public law is possible. In truth this discussion concerned law as such because law and State-law were identified. The question had become acute since the N.E.P., which temporarily again allowed private commerce, had given rise to the civil law code of 1923 and other codes. The older Bolshevist legal school denied the possibility of a really socialist law. Its most prominent representative, PASJOEKANIS, had emphatically argued that law, and especially civil and penal law, is unbreakably bound to commodity exchange from which it derives its determining principle of equivalency. This implied that the transition from the equivalent distribution (everybody receives the equivalent of his labour) to the communist distribution (everybody receives what he needs) necessarily leads to the expiration of law.
The State arises when the class-organization of power embraces a market community of sufficient extent. As protector of the exchange relations it becomes public power. State and law are consequently forms of "civil society". The proletariat is urged to use them as long as there is not yet one single planned economy. As long as there exist market-relations between the State industries, civil law and public law cannot disappear. But they can never be transformed into a socialist law. The technical rules for the coordination of the Soviet-economy which will replace them are sometimes called "economic law". But when they lose any public coercive character it makes no sense to retain this name. This view of PASJOEKANIS' was indeed in accordance with the "Leading Principles" of the Penal Law of the R.S.F.S.R. of 1919, which emphatically declared that law, as a function of the State, will in the last instance be destroyed by the proletariat.
Nevertheless, the conception of this prominent Soviet-jurist and his adherents was fundamentally rejected in the standard-work The Law of the Soviet State (1938), written under the guidance of WYSJINSKIJ, and apparently inspired by STALIN's policy of intensification of the Soviet State and its law. WYSJINSKIJ argues that all Soviet law is ruled by the same socialist principle, and that it is perfidious to divide it into a bourgeois sector of civil law and a socialist sector of economic ordering law. The civil law which protects the property of the toiling labourers is as much socialist as the economic law. This meant a decisive turning point in the bolshevist theory of civil law, and the adherents of the old theory were urged to revoke their theses (cf. the interesting thesis of G. KUIJPERS, De Russische Problematiek in het Sowjet-Staatsbeleid (1954), pp. 135 ff).

The so-called political pluralism.
On this point orthodox Marxism is theoretically much more distinctly alive to its consequences than "political pluralism". The latter wants to dissolve the State into a federation of mutually independent syndicates or corporations, each administrating a particular branch (function) of public services according to an economical viewpoint. These corporations are to stand up for the particular interests of their own separate services. The "political function" proper which has to weigh the interests of the whole against each other, would have to be organized separately (cf. my Crisis in de Humanistische Staatsleer, [The Struggle for a Christian Politics] p.155, and the literature quoted there). This pluralism keeps talking of a "State" (2), although in principle it wants to eliminate the structure of the latter from the internal administrative activity of the projected syndicalist federation.
There is no awareness of the inevitable "economic monism" (3) that will result from its principles which leave no room for a real State. The opinion of the French syndicalist EDOUARD BERTH: "l'Etat est mort" (4) is the inescapable consequence for every "political pluralism" in the sense meant here.
_____
(2) Cf. LASKI, A Grammar of Politics (1925), pp. 72 ff. This writer criticizes the political pluralism of guild-socialism. His critique is, however, not fundamental since, from his socialist point of view, he also strains the economical aspect in the structure of the body politic. He defines the State as "the body which seeks so to organize the interests of consumers that they obtain the commodities of which they are in need" (p. 69). The State is distinguished from other "associations" only by the coercive nature of its membership, and by its territorial character. Notwithstanding the addition of these specific characteristics, this view continues to seek the typical leading function of the body politic in the economical aspect. This fact appears from the argument adduced for the territorial criterion: "The interests of men as consumers are largely neighbourhood interests; they require satisfaction for the most part in a given place(!)".

(3) This term is from Prof. KUNG CHUAN HSIAO in his excellent book: Political Pluralism. A Study in Contemporary Political Theory (1927), pp. 122 ff.
(4) i.e. "The State is dead". Cf. LEON DUGUIT, Le droit social, le droit individuel et la transformation de l'Etat (Paris, 1908), p. 38/9. DUGUIT is also an adherent of "political pluralism".
_____
The fundamental importance of our structural theory for the theory of constitutional law, the general theory of the State, and practical politics. The structural idea of the State cannot be used in a rationalistic deductive way.
We cannot use the theoretical idea of the structural principle of the State, as it has been explained above, in a rationalistic deductive way. Neither can we do so with that of the structural principles of the other societal relationships. For in an actually existing body politic the invariable structural principle assumes a relatively variable positive shape. We can understand the positive realization of the structure of the State only in its coherence with the variable historical political situation, and never apart from its enkaptic structural interweavings.
It is only in the latter respect that the relative truth of the view can be recognized that the body politic is always liable to the influence of class interests. But it is certainly incorrect to reduce the State to an instrument of these particular interests. The truth is that no real body politic can exist if it would indeed completely set aside its inner nature as a res publica. The famous German sociologist LORENZ VON STEIN, who was at first strongly influenced by the theory of ST. SIMON and the French socialists, realized this when he remarked later on that by its inner nature the State will always try to elevate itself above class interests. If not, it would dissolve itself into the economically qualified societal relationships of "civil society".
The insight into its invariable structural principle is therefore fundamental both for the special sciences investigating the body politic in its different modal aspects, and for the general theory of the State; it is also of fundamental importance for practical politics.
In my book De Crisis in de Humanistische Staatsleer [The Struggle for a Christian Politics] I have shown that the theory of constitutional law was led astray by eliminating the structural principle of the State-institution. The introduction of the formal-juridical method into this theory was bound to result in an empty juridical scholasticism.
A large number of fundamental problems can only be theoretically elucidated with the help of a real structural theory of the State, e.g., the problem of sovereignty; that of the juridical sense of the parliamentary system; the theory of the basic rights; the juridical conception of administrative law; the difference between administrative and civil jurisdiction, etc.
I pointed out that the "sociological political theory", insofar as it tries to study the real life of the State with the aid of naturalistic methods, eliminates the real structure of the body politic. This "sociology of the State" is therefore no theory of the State. As to practical politics I tried to show that the influence of a wrong view of the body politic is evident in many a conception of "organic representation" and of "organic suffrage". In a separate treatise devoted to the latter subject I examined the appeal to the political position of the medieval craft-guilds as an example of "organic representation" (5).
_____
(5) Het Vraagstuk van het organisch Kiesrecht in een nieuw Stadium. (Almanak van het studentencorps N.D.D.D. aan de Vrije Universiteit, 1935, pp. 105-122).
_____
Then it appeared that any such appeal to these guilds is based on a lack of insight into their fundamentally different internal structures as industrial organizations, and as political components of a medieval town. In the latter capacity the guilds had political domination founded in military power. This fundamental structural difference was in most cases apparent in the distinction between industrial members and political members. Different categories of the latter had nothing to do with the industrial community of the craft-guilds. We shall revert to this subject.