Dooyeweerd: Structural Principle of the State (10) 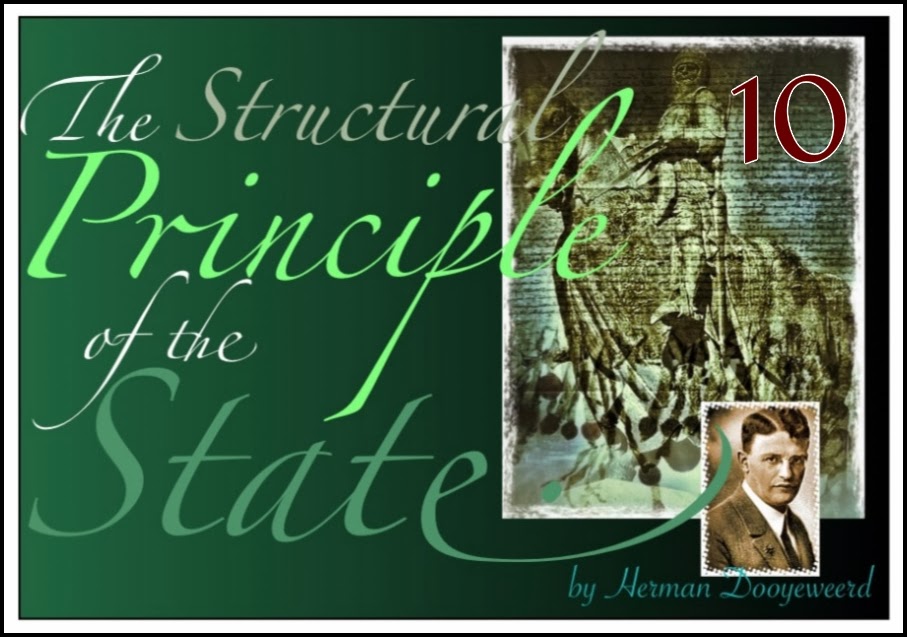 THE STRUCTURAL PRINCIPLE OF
THE STATE (10)
by Herman Dooyeweerd

___________________________
GO TO
[1]  [2]  [3]  [4]  [5]  [6]  [7]  [8]  [9]  [11]  [12]  [13]  [14]  [15]  [16]
_________________________
The civil law-sphere of the State.
The internal public law-sphere of the State has its typical correlate in the sphere of civil law as a private common law (jus commune). Every communal legal sphere is correlated with inter- individual legal relationships. But in addition to its correlation with the typical international relations of a public law character, the public communal law-sphere of the State has a typical correlate in an inter-individual legal sphere which is unbreakably bound to the structure of the body politic.
It is true that private common law does not immediately develop within the framework of the State so long as the undifferentiated societal relationships have not yet been completely conquered. The Carlovingian State did not succeed in replacing the ancient barbarian tribal laws by a common private legal order. This body politic lacked stability, and before Charlemagne's organization of the public administration could be followed by the development of a private common civil law, the republican empire collapsed.
The Roman republic started with an elevation of the primitive ancient inter-gentilitial law of the Quiritian tribes to a civil law bound to Roman citizcnship. The lex duodecim tabularum was nothing but a description of old customary rules and was on the same primitive level as the barbarian lex Salica described under the reign of the Merovingian king CHLODOVECH.
It was only under the influence of the ius gentium that the idea of a common private law developed. Initially this ius gentium did not exceed the boundaries of a law containing the common ingredients in the legal customs of the old Italian tribes. But gradually it emancipated itself from the primitive tribal inter-gentilitial law. In keeping with the expansion of the Roman city-State into a world-empire, the ius gentium assumed the characteristic of an integrating world-law founded on the principle of the legal equality of all free men, as legal subjects in the inter-individual legal relationships. It was this private world-law which the classical Roman juris consults connected with the Stoic conception of the ius naturale.
The Stoic idea of natural law in principle broke through the classical Greek idea of the city-State as the perfect natural community. It proclaimed the natural freedom and equality of all men as such. It is true that the Roman ius gentium did not entirely satisfy these principles of freedom and equality, insofar as it maintained slavery; nevertheless, it constituted an inter-individual legal sphere in which every free man was equally recognized as a legal subject independent of all specific communal bonds, even independent of Roman citizenship. This was the fundamental difference between the undifferentiated Quiritian tribal law and the private common law.
It was within this legal sphere that the undifferentiated authoritative proprietorial right, contained in the dominium ex iure Quiritium, was dissolved into a "bonitary" ownership lacking any authoritative character. Under the influence of the ius gentium the term pater familias, which in the ancient Quiritian tribal law meant the quality of domestic chief, was in its civil legal use transformed into a simple nomen iuris designating nothing but the abstract quality of a legal subject, belonging to every free man as such.
If we consider only the fact that the ius gentium even emancipated the function of legal subject from Roman citizenship, the question may arise as to whether this common law had anything to do with the structural principle of the State. One might suppose it was much more related to the Stoic idea of a temporal community of the whole of mankind. But we have seen in an earlier context that this universalist idea did not correspond to any structure of individuality in which a temporal community can only be realized.
To answer the question asked above, we should consider that the ius gentium could only become a real common private law by abstracting the legal relationships regulated by it from any specific non-juridical qualification. It may be that the Roman societas, as a contract of common law, took its origin in the Roman familia, later on oriented itself to occassional contractual cooperations for the purpose of economic profit or speculation, and finally to durable economically qualified undertakings. Nevertheless, its common law rules neither interfered with the internal sphere of the family, nor with that of industrial or commercial life. The same thing can be observed with respect to the other contracts regulated by the ius gentium, to the jura in rē of the latter, to the common law rules concerning family law and hereditary right, etc.

The inner nature of the Roman ius gentium.
The common private law was only led by natural law principles of justice, the "nature of the matter", legal security, and equity, in their application to the inter-individual legal relationships of men as such. In this respect it was indeed the typical private legal correlate of the public communal law, which equally lacks a specific non-juridical qualification and is ruled by the principle of public interest. In addition, the ius gentium was a typical system of legal rules destined for the decision of law-suits by the common courts of the State. As to its formal juridical source it was praetorial law during the classical era of Roman jurisprudence. In its typical character as an integrating private common law it could not develop outside of the framework of the res publica, which was only able to realize the typical principles of the ius gentium. This realization was doubtless a matter of public interest, although the Roman lawyers emphatically established that, as to its inner nature, the common private law did not pertain to the res publica but to the interest of the individual legal subjects in their inter-individual relationships. The public interest was concerned with the private common law insofar as the res publica, by means of an impartial common jurisdiction, could prevent a complete disintegration of private law and a revival of the ancient undifferentiated legal spheres; for the latter were incompatible with the State's monopolistic organization of the sword- power and the public legal authority.
In this respect the sharp distinction between public and private law was a vital concern of the res publica. By controlling the jurisdiction over all private law-suits, in as much as they pertained to the sphere of common private law, the State was able to prohibit any attempt on the part of private power-formations to usurp an exclusive authority over the subjects of the body politic. Since the common private law was also sharply distinguished from all internal private legal spheres of a typical non-juridical qualification, its formation was by the nature of the case to the res publica. Outside of the latter there was not any room for an inter-individual common legal sphere based upon the natural law principle of equality of all free individuals as such. As to their inner nature the non-political societal relationships nowhere corresponded to this principle. But with respect to the State this principle was the natural correlate of the principle of the public legal equality of its subjects as to their common subjection to the public authority.
The distinction between jus civile and jus gentium was doomed to disappear, since under the influence of the praetorial law the former lost its material coherence with the archaic Roman tribal law and was almost completely accommodated to the jus gentium. In addition, Roman citizenship was to an ever increasing degree attributed to peregrines. In the classical period of Roman jurisprudence the victory of the jus gentium over the jus civile was already decided. JUSTINIAN's codification abolished the last remnants of the ancient civil law, which had long lost any practical significance.
It is true that, as to its material content, the formation of the private common law, at least in the classical period of Roman jurisprudence, was not due to the legislator but to the Roman lawyers. In this sense it was doubtless "Juristenrecht". But the work of the jurisconsults was bound to the system of actions formed by the praetor. And it was by means of these actions that the State retained the legal control over the private common law-sphere, which apart from the res publica was doomed to disappear.
Legal history shows that this bond between the idea of a private common law, in the sense of the jus gentium, and that of the res publica is not an exclusive peculiarity of the Roman legal system. There is not any instance to be found of a private common law, in the sense defined above, which has developed outside of the State.
It may be that the Roman legal tradition has exercised a considerable influence upon the development of private common law in the modern continental States of Europe where the legislator has codified its rules. But in England the influence of Roman law was only small. Nevertheless here, too, a civil law-system has developed based on the essential principles of juridical equality and freedom of all individuals in their inter-personal civil legal relations. Here this development took place by means of a material transformation of the feudal law into a common private law. And it was brought about by the formative activity of judicial organs of the State, viz. the common law courts and the supplementary equity jurisdiction of the chancellor. The classical English jurists considered this common civil law as the expression of natural justice, just as the Roman lawyers had looked upon the jus gentium as the expression of the jus naturale.
We could also point to the Scandinavian States whose common civil law has not undergone the influence of the Roman ius gentium. [Roman Law in Scotland by Wm M. Gordon (pdf)]

The radical difference between common private law and the undifferentiated popular or tribal law.
Under the influence of the Historical School the erroneous conception arose that common civil law was nothing but the ancient folk- or tribal law, developed in a technical sense by the jurists. This view was opposed to BODIN's idea of the sovereignty of the legislator with respect to the formation of civil law. The truth is that there is a radical difference in nature between primitive folk- law and the highly differentiated common private law; the latter could only develop after the material destruction of the undifferentiated primitive society of which the popular or tribal law was a juridical expression. And this destruction was due to the rise of the State as a real res publica.
Irrespective of the question as to whether the common private law has been codified by the legislator or has been preponderantly formed by the courts of the State, it is by its inner nature a legal sphere bound to the body politic. And the original competence to its formation cannot belong to any other organized community but the State. By means of this common private law the body politic can bind in an enkaptical way any specific (non-juridically qualified) private law to the principles of inter-individual justice, legal security and equity. But the internal spheres of these specific kinds of private law, qualified by the non-juridical leading function of the societal relationships to which they belong, remain exempt from the competence of the State. In the introduction to the general theory of the enkaptic structural interlacements we shall show that this thesis is not an arbitrary assumption due to a subjective political conviction. It will appear that it is rather founded in the structural conditions of every differentiated human society, which cannot be disregarded with impunity.