Dooyeweerd: Structural Principle of the State (8) 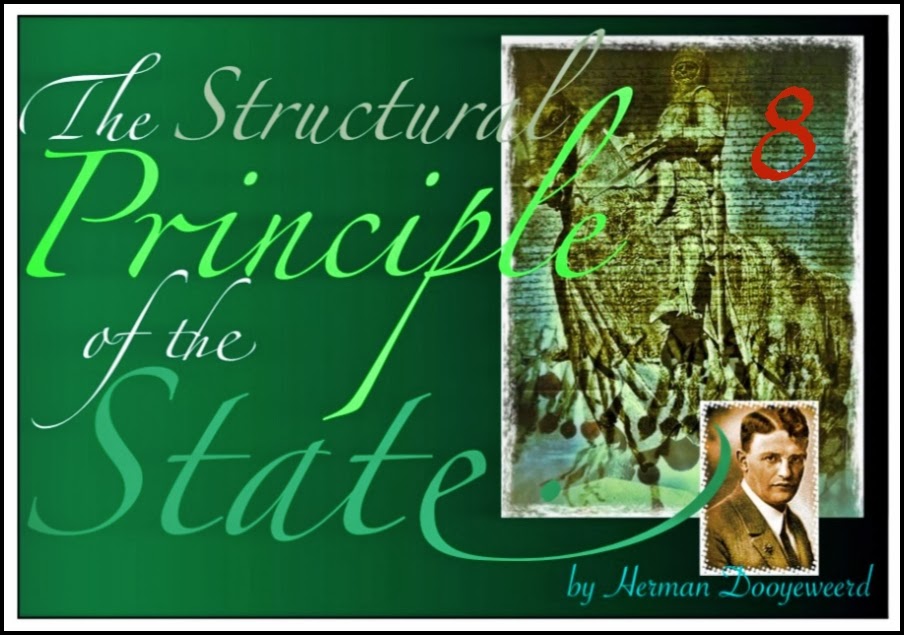 THE STRUCTURAL PRINCIPLE OF
THE STATE (8)
by Herman Dooyeweerd 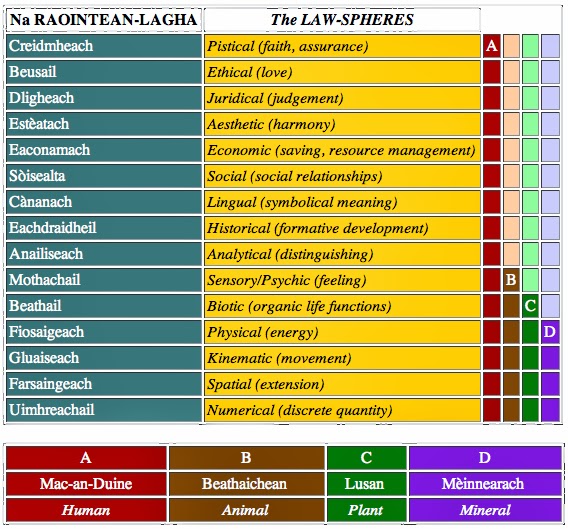 Above are three example aspectual schemas illustrating the supratemporal modal kernel (also called "moment" or "nucleus") along with the accompanying anticipatory and retrocipatory analogies integral to each aspect. Please use in conjunction with the chart above to help clarify role and position of each aspect.
THE TYPICAL LEADING FUNCTION OF THE STATE AND THE THEORY OF THE SO-CALLED 'PURPOSES' OF THE BODY POLITIC.
We will now examine the typical leading function of the State's structure in its indissoluble coherence with the foundational function analyzed above [see previous posts in this series].
At the outset we warned against identifying the leading or qualifying structural function of a thing with the purposes it is to serve. We have repeated this warning with reference to the inner structure of natural communities. Similarly, the leading or qualifying function of an organized human community should not be misinterpreted as the end or ends that human beings try to reach in this relationship by means of their organized endeavours. This warning is especially to the point in the case of the typical leading function in the structure of the State.

The theories of the "purposes of the State" bear no reference to the internal structural principle of the body politic.
The theory of the purpose of the State is as old as political philosophy. It is burdened with the great diversity of meanings implied in the word "purpose", which is used now in a metaphysical-realistic, now in a subjectivistic-nominalistic sense, now in an absolute, then in a relative way. In immanence-philosophy the theory of the purpose of the body politic sometimes contained an a priori rational construction, serving to justify the State, and thus assumed an explicit axiological character.
Realistic scholasticism used this theory to prove that the institutional Church is of a higher value than the State. The Humanistic doctrine of natural law and that of "Vernunftrecht", in their subjectivistic-teleological constructions of the body politic, made the latter into a mere instrument in the service of the individual or into that of a national cultural community. Then the "purpose of the State" was conceived in the sense of the classical liberal idea of the law-State (1)(LOCKE, KANT, V. HUMBOLDT) or in the eudaemonistic [ie right action is seen as that which leads to "well-being"] sense of the "welfare State" (the police-State of CHR. WOLFF and his pupil JUSTI). Or again in the idealistic sense of a culture-State (FICHTE is his last phase) (2).
_____
(1) The term law-State is used here in the sense of the German term "Rechtsstaat", which is not to be adequately rendered by "rule of law".

(2) FICHTE defended his idea of a culture-State in his Staatslehre (1813).
_____
But this teleology never had any inner relation to the real structural principle of this societal institution. From an historical standpoint the different theories of the subjective "purpose of the State" propounded in the Humanistic doctrines of natural law prove to be only the expression of a political tendency at the time of their inception. This explains why they became untenable as soon as the historical situation changed. Hence the futility of every attempt to grasp the intrinsic structural limits to the task of the State in such a teleological way.

(5) Metaph. d. S. (the edition cited), p. 433.
_______
The theory of the law-State in its second phase as the theory of the merely formal limitation of the purposes of the State. The formalistic conception of administrative jurisdiction.
In its second phase (STAHL, OTTO BÄHR, RUDOLPH GNEIST) the theory of the law-State was not really a theory of the purpose of the body politic any longer. It assumed a formalistic character: the old liberal idea of the law-State was transformed into that of the rule of statute law. Law, in the sense of a civil legal order protecting the subjective innate rights of man, was no longer considered to be the purpose of the body politic. Instead, the idea of the law-State was now related to a public administrative legal order as a formal limit to which the magistrature would have to be bound in its administrative activities, when promoting cultural and welfare purposes. This formal legal limitation was required in the interest of the legal security of the citizens. This "legal restriction" of the "executive authority" was found by subordinating the administrative organs to legislation. The statute law was to protect the citizens from administrative arbitrariness. In this sense the modern idea of the law-State was formulated by FR. JULIUS STAHL in his statement: 'The State should be a law-State... It should accurately determine the roads and boundaries of its activity as well as the free spheres of its citizens in a legal way... and it should not realize the ethical ideas any further than insofar as they belong to the legal sphere. The concept of the law-State is not that the body politic only maintains the legal order without any administrative purposes, or accords only complete protection to the rights of individuals; it does not mean the aim of the State but only the mode and character of realizing its political ends' [FR. JULIUS STAHL, Philosophie des Rechts nach geschichtlicher Ansicht (3e Aufl.) Bnd. II, I, pp. 137-138: "Der Staat soIl Rechtsstaat sein...Er soIl die Bahnen und Grenzen Seiner Wirksamkeit wie die freie Sphäre seiner Bürger in der Weise des Rechts genau bestimmen... und soIl die sittlichen Ideen von staatswegen nicht weiter verwirklichen als es der Rechtsphäre angehört. Dies ist der Begriff des Rechtsstaates, nicht etwa dass der Staat bloss die Rechtsordnung handhabe ohne administrative Zwecke, oder vollends bloss die Rechte der Einzelnen schütze, er bedeutet nicht Ziel des Staates sondern nur Art und Charakter, dieselben zu verwirklichen."]
In itself this utterance seems to be quite acceptable. But in the context of STAHL's view of law it implied that public administrative law was depreciated to a merely formal law and opposed to (civil) material law in a dualistic way. According to STAHL the principles of material law are to be found in the Decalogue, and the subjective private rights are in principle grounded in the latter.
It is evident that in this conception of the law-State the legal order is connected with the power of the body politic only in an external, formal way. STAHL, and all the adherents of this idea of the law-State look upon administrative law only as a formal limitation ("Schranke") within which the government can operate free of material legal principles when pursuing the "cultural and welfare purposes".
The non-juridical "purposes of the State" are not given any internal structural delimitation, if their administrative realization is only bound to the formal limits of legislation. This formalistic conception of public law is closely connected with the equally formalistic, and essentially civil juridical view of administrative judicature, represented as a requirement of the modern constitutional State by the Hessian jurist OTTO BÄHR (6) and RUDOLPH GNEIST (7).
_____
(6) O. BÄHR, Der Rechtsstaat, p. 134, explicitly demands that "the power of the government... in its application..., just like private rights, shall be subordinate to the law" [die Regierungsgewalt... in ihrer Betätigung...gleich den Privatrechten unter dem Rechte" stehen soll].

(7) R. GNEIST, Der Rechtsstaat.
_____
Even at the present time it is customary to distinguish between legal questions and utility questions in the theory of administrative judicature. The merely formally conceived legal questions are subjected to the decision of the administrative judge; but the material, internal legal questions are not, because the latter are qualified as "questions of utility". This is really a consequence of the formal idea of the law-State, and shows a lack of a really structural conception of the internal law of the body politic. We shall return to this point in a later context.
In its second phase the theory of the law-State is the expression of a political tendency that has radically broken with the old-liberal programme of political non-interference with the free (non-political) society. The "executive" is here subjected to the formal limits set by the legislature as far as the State's administrative task is concerned. This task is supposed to be the peculiar domain in which the body politic has to promote the prosperity and the "culture" of the national community.