Dooyeweerd: Structural Principle of the State (4) 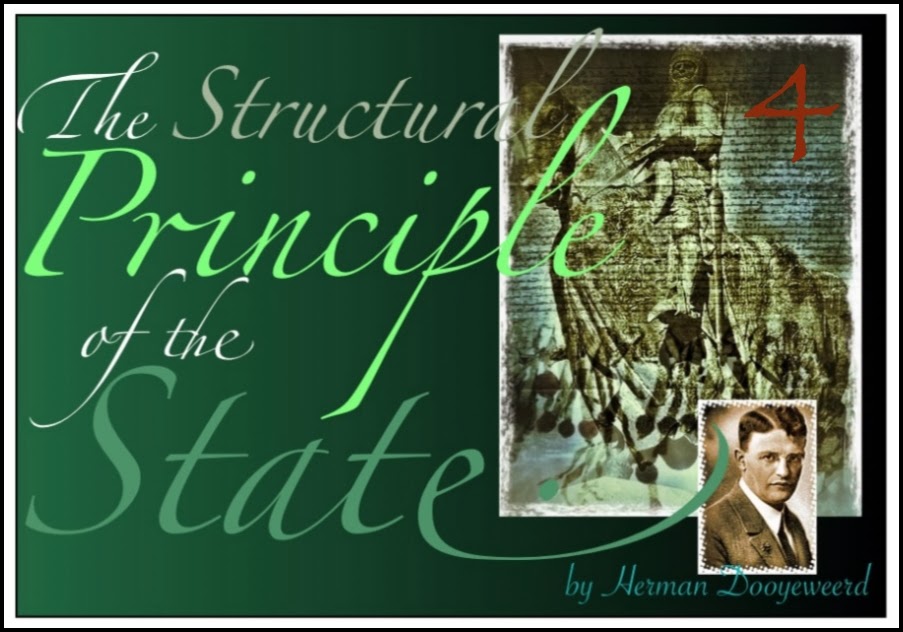 THE STRUCTURAL PRINCIPLE OF
THE STATE (4)
by Herman Dooyeweerd

___________________________
GO TO
[1]  [2]  [3]  [5]  [6]  [7]  [8]  [9]  [10]  [11]  [12]  [13]  [14]  [15]  [16]
_________________________
The dialectical tension between the juridical and the sociological conception of the State. The dualistic theory of the body politic.
Since the rise of a formalistic juridical method in the science of constitutional law (the School of LABAND and GERBER, represented in the Netherlands by BUYS), the internally contradictory dualism of "right and might" also led to a dualistic theory of the State, viz. a sociological so-called "empirical", and a normative juridical theory, as they were set forth in JELLINEK's Allgemeine Staatslehre (1st ed. 1900), without any successful attempt at an internal reconciliation.
And finally it led to a fierce antagonism between these two, when the naturalistically minded sociology began to deride the "scholasticism of the jurists" and, conversely, the "normological" school of KELSEN caricaturized the efforts of the naturalistic sociologists to conceive the State in a manner different from the "purely juridical" way. Even SIEGFRIED MARCK, though oriented to LITT's dialectical sociology, frankly capitulated to this dualism. According to him, political theory as "an empirical science" (Wirklichkeitswissenschaft), as a "sociology" dealing with "the totality of the State in its empirical configuration", always remains caught in the dualism of "sollen" and "sein" ["what is" and "what ought to be"]. Only a Hegelian dialectical metaphysics would be able to develop a normative idea of the body politic which would be able to give a supposed synthesis transcending the fundamental antithesis between a juridical and a sociological conception of the State (Substanzbegriff und Funktionsbegriff in der Rechtsphilosophie, 1925, pp. 150 ff). But MARCK explicitly rejects this metaphysics.
In contrast to this view we have established that outside of its supra-modal individuality structure the empirical State cannot exist at all. There can simply be no question of juridical and other aspects of the body politic, if we do not relate them consciously or unconsciously to this normative structural principle. But MARCK could not accept this state of affairs on his dialectical phenomenological standpoint. Consequently, like other dualists, he could find no way out of the crisis in the theory of the State.